What allows a population in a heterogeneous landscape to become locally adapted? In general, adaptation to a rare habitat type is difficult because divergent selection is counter-acted by the homogenising effects of gene-flow. However adaptation to a rare habitat type may occur if it has a higher quality, so that a greater number of offspring can be produced there, to compensate for its relative rarity in the landscape.

In a new paper published in Ecology Letters, we focused on an alternative way in which a habitat may be considered to have higher quality: by increasing the quality, rather than the quantity, of offspring produced.

There are many examples where the natal habitat effects the quality of an offspring, and that effect carries over to its quality as an adult (see Table). We were particularly interested in carryover effects on competitive ability. For example, a chick who is raised in a resource-rich environment may develop into an adult who is better at singing (e.g. Grava et al., 2012, 2013a) and larger than other birds (e.g. Van Treuren et al. 1999; Van De Pol et al. 2006; Ens et al. 2014) and so better able to attract a mate and win a breeding territory. We wondered if such carryover effects could also also permit adaptation to a rare habitat type, counteracting gene flow from a more-common but lower-quality habitat type.

We created an individual-based, genetically and spatially explicit model of a single population on a landscape consisting of two habitat types. The figure below shows the first key result of the paper. In the absence of any differences in habitat quality (panel a), the population will adapt to the habitat type that is most frequent in the landscape (blue). However, when the rarer habitat type (red) confers a competitive advantage upon offspring raised there (panel b), then the population splits into two ecotypes, each relatively well-specialised to one of the two habitat types (red and blue).

We believe that a comparison of blue tit populations on the French mainland vs. the island of Corsica (reviewed in Charmantier et al. 2016) may provide an empirical example of the mechanisms in our model. On the mainland, the majority habitat type is deciduous, and blue tits who settle in the rarer evergreen patches are maladapted (Blondel et al. 1993), resulting in source-sink dynamics (Dias & Blondel 1996; Dias et al. 1996). On Corsica however, where evergreen habitat dominates, the source–sink pattern is not simply reversed. Instead, trait divergence into two ecotypes has been documented (Porlier et al. 2012). We think the reason that the reason for this difference in ecoevolutionary outcomes is because the deciduous habitat type has a higher quality and confers a competitive advantage to offspring raised in it. In the paper we discuss the evidence for this, including the phenological differences between the habitat types and its effect on social dominance (Braillet et al. 2002). We also note that blue tits on Corsica have reduced dispersal which matches the predictions of our model.

Finally we propose that carryover effects as described by our model may provide a previously overlooked mechanism to initiate isolation by ecology. In current theory, isolation by ecology (Shafer & Wolf 2013) is initiated by divergent selection that is strong enough to counteract gene flow (Nosil 2007; Nosil et al. 2008). This creates a positive feedback in which local adaptation leads to a further reduction in realised gene flow between ecotypes (Rundle & Nosil 2005). In our model, the gene flow barrier is initiated by the effect of the environment upon the phenotype rather than as a genetic effect.

(A link to a previous blog post when I first became interested in the blue tits case study.)

One thought on “Carryover effects and local adaptation” 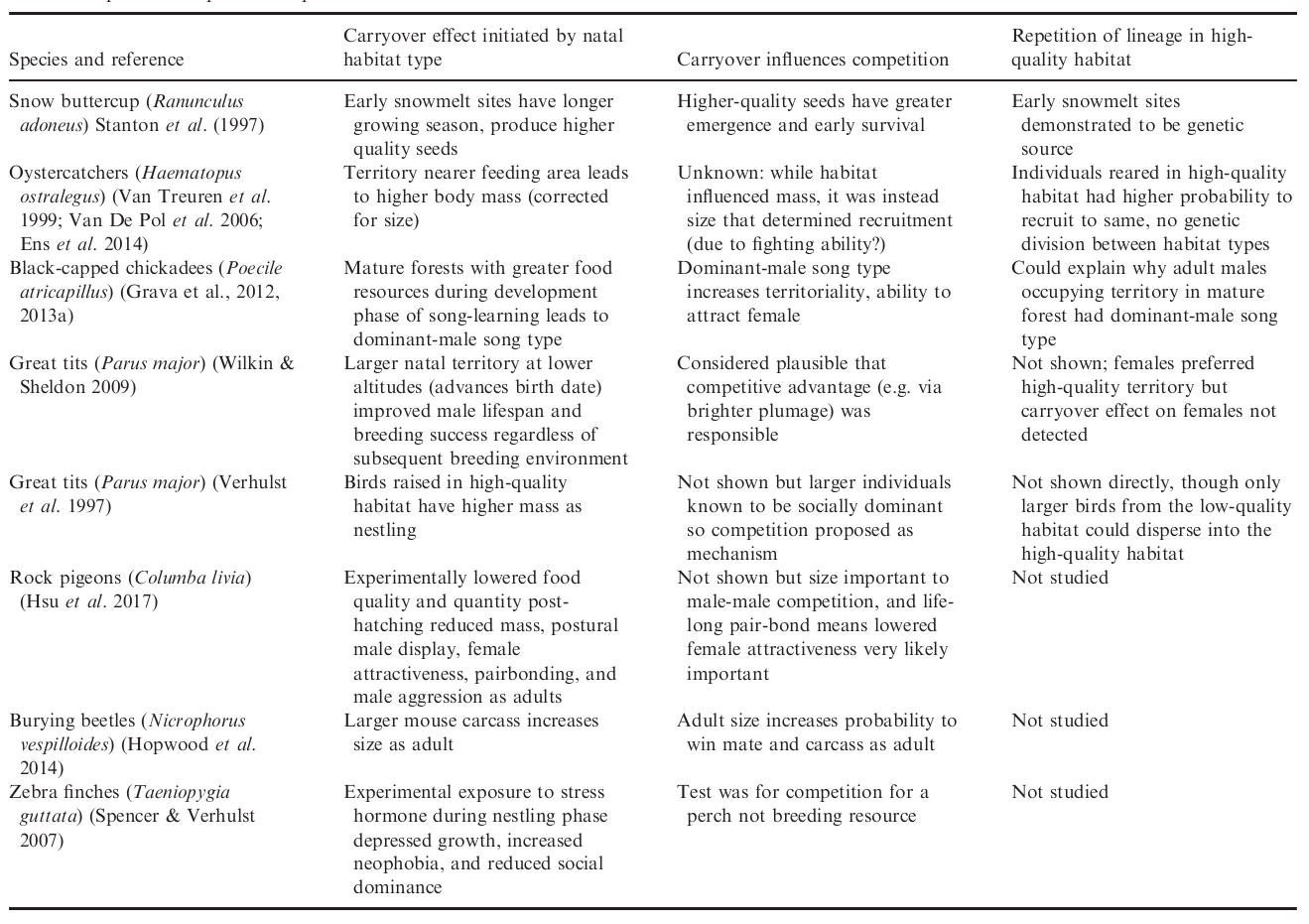